In a nation with an endless supply of high octane news, political drama, and White House turmoil, there are plenty of stories that stood out for me in 2018  – but I’d like to share one in particular that I often think about:

Back in early November, we were on assignment in the small town of Dawson, Georgia, as part of our mid-term election coverage.  The State’s Governor’s race was getting particularly nasty with racist robocalls  and explosive accusations of voter suppression.

It’s an especially sensitive issue in a state where the painful struggle for civil rights still lingers. As we travelled around, I could sense growing fears among African-Americans—not just in Dawson, but across Georgia—that history was repeating itself.

Tamika Williams was one of more than 50,000 voters who mysteriously vanished from voter rolls.  She told us she had been living in the same home in Dawson for more than 6 years and registered to vote in every election without incident – until this year.

The U.S. midterm races are getting nasty with everything from racist robocalls to voter suppression. Our @RichardMadan explains.#ctvpp #cdnpoli

She told us when she went to the advance polls, she was told her name was not on the list and was denied her right to cast a ballot.  She says she was given no explanation and instructed to fill out several forms and then mail it in to get her name restored – a lengthy process that probably wouldn’t be resolved until well after Election Day.

We later met up with Reverend Ezekiel Holly. The civil rights pioneer, now in his late 70s, said he returned to his activist roots to ensure eligible voters in the town could exercise their right he helped fight for back in the 1960s.

He brought us to the local NAACP office, where old newspaper clippings from that turbulent era were posted on the wall.  Stories about racially-motivated church burnings were beside vintage campaign posters warning against equal voting rights. It was a sobering reminder about racial tensions in America.

Down the road, a pastor at a small Baptist Church held a get-out-the-vote rally, reminding the congregation how many of their relatives risked their lives for civil rights and it was their responsibility to uphold that right:

A get-out-the vote rally in rural Georgia – mixing prayer, hymns, and a reminder of the painful struggle for civil rights amid accusations of voter suppression #MidtermElections2018 pic.twitter.com/0lc8Qjj5Vc

In the final weekend before election day, President Trump held a last minute rally in nearby Macon, GA for Republican Brian Kemp. We had a prime spot for this.

In the end, Kemp won the election; Abrams says she will seek political office once again.

But the most meaningful update for me was from Tamika Williams.  After being turned away from advance polls and feeling discouraged, she sent me this photo with her smiling and with a sticker on her shirt – confirming that she voted on Election Day. 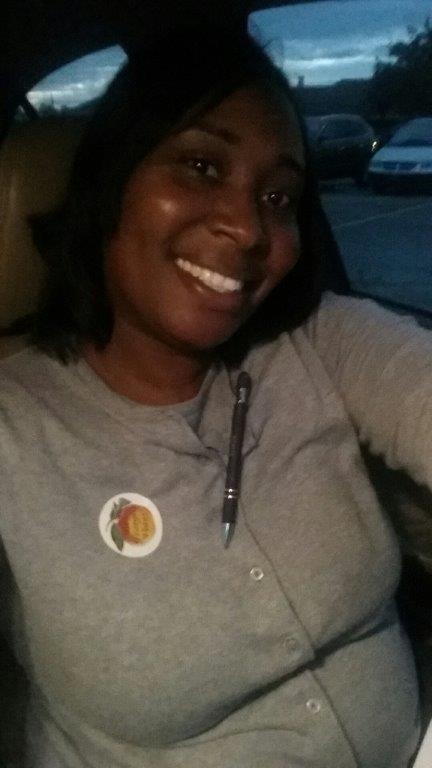